Peter Medak's 1980 Haunted House masterpiece The Changeling is an underappreciated gem.  Listen in as Jeff introduces you to this lesser-known (and lesser-appreciated) film in a special mini-episode and find out if he Saw Something Scary.

Oooooh Saw Something Scary in the Ring, don't you dare be sour - clap for the power of the new day dawning for this podcast.

CBS Combat Sports Insider Brian Campbell and host of In This Corner with Brian Campbell joins the guys to discuss the current affairs of the WWE universe following Jinder Mahal's title ascension and the lead up thus far to both Extreme Rules and Money in the Bank.

As you [hopefully already] know, they don't come any better than Brian Campbell so this is a must-listen episode.

And if that weren't special enough this episode also marks a momentous transition for the podcast - Saw Something Scary in the Ring is going out on its back and The Mega Podders is taking the rub into a bright future.

All is explained within this episode so download and listen away!

Somebody let Kevin Smith make another movie and frankly, in doing so, committed a heinous crime against good taste.

For some unexplainable reason the Saw Something Scary guys watched.  That film was so toxic it apparently melted Derik's mic.

Just to be clear - the guys from the Triple S Podcast watched a Kevin Smith film.  Did they see something scary?  Tune in and find out.

"You either die a Legends Killer or live long enough to see yourself become a tool."

That's how that phrase goes, right?  Or at least it is when it comes to Randy Orton.  Ok, that's not fair - Derik totally doesn't feel that way about RKO but the discussion he and Jeff have about Randy's most recent Twitter storm almost devolves into throwing hands.

The guys also discuss the most recent episodes of Raw and Smackdown Live before previewing this week's Backlash PPV.

Did this week's WWE slate give viewers a chance to see something scary?  We'll see... on the latest episode of Saw Something Scary in the Ring.

Have you ever wondered what Derik and Jeff sound like punch drunk?  Here's your chance - the guys burned through the midnight oil and in to the small hours of the morning to get this episode in the can.

In this episode the guys voice high hopes for Wonder Woman (stay away Zack Snyder!), acknowledge the greatness of Mike Flanagan, and compare Hush to Don't Breathe.

Did they also see something scary?  Download to find out!

So yeah, as the title indicates, when the WWE goes to the United Kingdom there isn't a whole lotta scary going on.  Yes, Finn was there (the non Demon King version) and so was Bray but nothing scarier than Dean Ambrose talking for 15 straight minutes went down.

That doesn't mean there isn't noteworthy stuff to discuss in the broader wrestling universe - including NXT's Aleister Black, Alexa Bliss, and - of course - Braun-StRoman-Reigns.

So you won't be seeing something particularly scary in the ring this week but you'll get plenty of discussion about the world of the squared circle.  And please let us know what you think about the episode - on Twitter or by leaving us a review on your favorite podcasting service.

It's time for the daddy of them all!  Well, the daddy of some of them.  Ok - the daddy of Carpenter's Halloween and all the movies that tried to copy it (looking at you, Friday the 13th).

On the way we check out some new trailers, talk about M. Nigh Shyamalan's renaissance-through-economy strategy, and the lasting merits (?) of the episode's influential centerpiece.

Watching Black Friday you'll see young women terrorized by a prank-caller with evil intentions, an early Margot Kidder... performance, and what might be the origin story of Lt. Donald Thompson (bonus points to those of you who get the reference).

But will you see something scary?

Visit show sponsor Forged Nutrition at forgedthroughthefire.com for all your nutritional and apparel needs!

The Horror that was The House of Horrors Match (SSitR #4)

Well, except for the tomfoolery that went on in and with Bray Wyatt's House of Horrors match against Randy Orton.

The guys from the Triple S podcast are under obligation to follow up on this traveshamockery so, like the good soldiers they are, the fellas wade into the mire and examine what happened - and what should have happened - with the most recent embarrassment of Bray Wyatt.

There's plenty more, however, on the all that was good in Payback 2017 as well as the immediate future for the WWE, along with Jeff quite possibly having lost his mind after the Strowman / Reigns.... match.

See you Inside the Ring 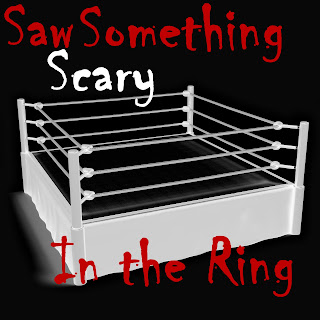 The guys from Saw Something Scary head out to the Plum Island Animal Disease Research Facility for a nice walk on the beach along side the good Doctor Lecter.

The path takes them through Jeff Hates Trailers, stopping briefly to look at new trailers for Cars 3, Amazon's revival of The Tick, Kingsman: The Golden Circle, and Once Upon a Time in Venice.  There is also a warning signs about Shut-In and a commendation of Lavender.

Soon, though, the party reaches their destination - the world of Jack Graham, Clarice Starling, Jame Gumb and... of course... The Artist Known as Hannibal the Cannibal.  In this case, you will see something scary.  But will you enjoy it more this time around?  Time to find out.

Ready when you are, Sergeant Pembrey.