Pooka [from Hulu & Blumhouse’s Into the Dark series] (SSS 87)

We're trying hard to get into the holiday spirit here at Saw Something Scary and we've called up Hulu & Blumhouse's Pooka to see if he can help.

We'll find out if he's the gift that keeps on giving or the kind of present you hope came with a receipt.

In the meantime, here's what you'll get:

News & pics keep rolling in from Jordan Peele's Us 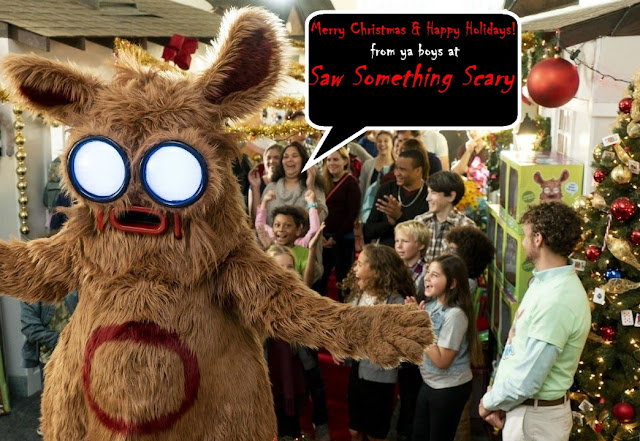 Derik and Jeff felt bad for being absent for a couple weeks so they're back to make amends with a special bonus episode.

Inside you'll find reviews for the recent Overlord as well as fan-favorite (or at least Jeff-favorite) As Above, So Below!  Time stamps are provided below if you want to skip around.

It's time for Derik and Jeff to meet The Man in the Box - this week Saw Something Scary dives into 2010's Ryan Reynold's vehicle Buried.

Here's what's ahead of you when you press that play button:

Strange days ahead for Jurassic World

Info is starting to trickle out from Jordan Peele's Us

Hit that download button, press play, and let's get going on the latest Saw Something Scary!

The Possession of Hannah Grace (SSS 85)

Saw Something Scary is back, just in time to give you the info you need on The Possession of Hannah Grace.

On the way there you know you'll get that sweet, sweet dose of Jeff Hates Trailers and The Horror Reporter.  Here's what's in store:

- The Chilling Adventures of Sabrina, Season 2

- The Roman Catholic Church Reports that Exorcisms are Up - Way Up.  Derik explains why.

- Movie Snobs Suck When It Comes to Horror Movies

III. Pull the Curtain: The Possession of Hannah Grace - 34:58